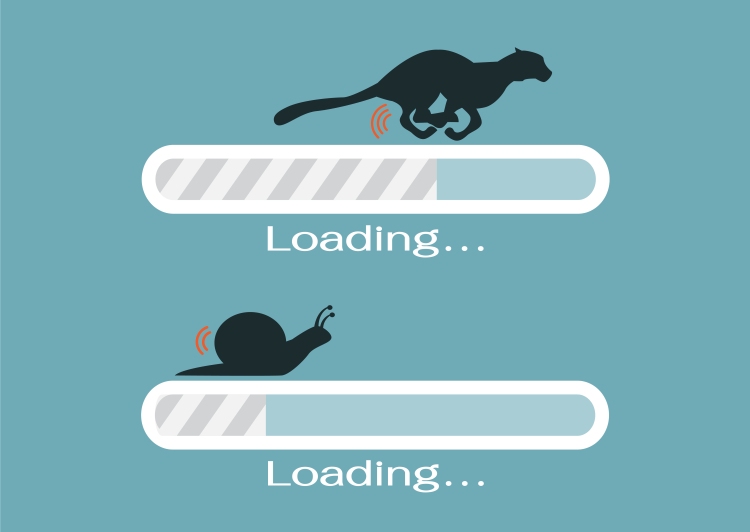 3 Reasons Why Website Speed is More Important than Ever

Today’s business environment is relentlessly fast-paced. Today’s startups blast into tomorrow’s enterprises. And just as rapidly, today’s unicorns take a one-way journey into “hey, whatever happened to…” country. However, there’s another critical piece of the velocity puzzle that many businesses are missing, and it’s costing them customers and profits: the speed of their website.

Nearly 50 years ago, the government introduced the phrase “speed kills” to warn drivers that going too fast from point A to point B could result in a detour to point C (the police station), point D (the hospital) or point E (the morgue). It was good advice then, and it’s still good advice now.

But when the scene shifts from the asphalt freeway to the information superhighway, speed doesn’t kill anything. On the contrary, it keeps websites alive as far as visitors are concerned. Here are the 3 reasons why:

The word “bouncy” has a happy and positive feel to it, while the word “sticky”…well, it doesn’t. Nobody shows up to a birthday party excited to jump around in the sticky castle, and swimming pool diving boards wouldn’t be doing their job if people stuck to them (although it would be kind of hilarious).

But when it comes to websites, sticky is glorious and bouncy is dreadful — and that’s where speed makes a massive difference. A study by Kissmetrics found that a one second delay in load time can send conversion rates plunging by seven percent! Think about that. Actually, don’t think about that. Just read this sentence. That took a whopping two (!) seconds.

An old joke in the SEO world goes like this: “Where’s the best place to hide a dead body? Page two of Google.” (And in related news, an old conversation among psychologists is: “Why do SEO people make jokes about hiding dead bodies?”)

Macabre humor aside, the point is simple to understand: for most (if not all) of their keywords, businesses either need to be on page one of Google — and preferably in the top three positions — or they might as well be advertising in the Yellow Pages (ask your grandparents).

Once again, speed is a big part of the SEO story. Google — which is obsessively secretive about how its algorithm works (the first rule of Google Search Club is that you don’t talk about Google Search Club) —has actually gone ahead and formally confirmed that page speed is a significant SEO ranking factor for mobile and desktop searches.

Einstein revealed that time, quite literally, is relative. But you don’t have to become a physicist or get yourself on a million memes to experience the deep truth of this in your bones. Here’s a fun little experiment:

Imagine that your favorite football team is losing a very important game. It’s late in the fourth quarter, and your beloved team is behind by six points. Although the clock is ticking down one second at a time, in your view the time is racing by. Surely, the clock must be rigged!

Now, imagine that your team is ahead vs. behind. The clock is still ticking down one second a time, but to you it’s not racing — it’s grinding slowly and painfully. Yet again: the clock must be rigged!

What this simple example demonstrates is what psychologists dub the perception of speed. Essentially, this means that our emotions influence how we grasp the velocity of passing time. Just a few seconds can seem like the “blink of an eye,” or a tedious wait — as we all know from toiling at the (not-so) express line in the grocery store.

The direct link to website speed here is unmistakable: visitors dislike waiting for websites to load. Actually, they hate it. Each extra second exponentially adds to their unhappiness, and makes it more likely that they’ll exact revenge by smacking the back button on their browser — never to return.

No, this doesn’t mean that websites must load instantaneously, like flipping channels on a TV. Technology isn’t there yet, and visitors aren’t unreasonable or unrealistic. But yes, it does mean that speed is connected UX, and ultimately, with brand: fast loading times creative a positive experience and emotions that are associated with the brand, while slow loading times do the opposite.

Website speed has always been important. But these days, it’s crucial — and in many cases, it’s THE MOST IMPORTANT factor. After all, it really doesn’t matter how amazing a website is and what it offers, if visitors never get there in the first place.

Louis is a writer, author, and avid film fan. He has been writing professionally for tech blogs and local organizations for over a decade. Louis currently resides in Allentown, PA, with his wife and their German Shepherd Einstein, where he writes articles for InfoGenius, Inc, and overthinks the mythos of his favorite fandoms.