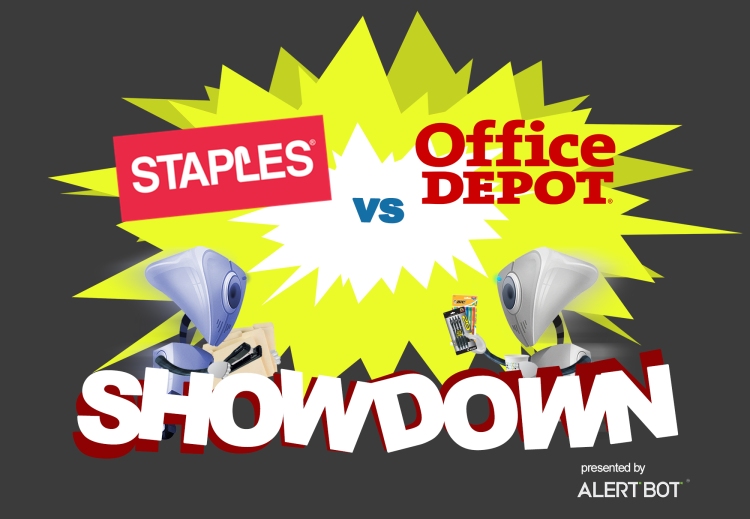 Even though our world continues to creep ever closer to being paper-free—trading our paper tablets for iPads, office supply stores have had to reinvent the way they do business and what their focus is. Staples and OfficeDepotTh are two mega-chain retailers who’ve long been in the fight, regularly providing printing services, as well as day-to-day necessities for the workplace, like pens, calendars, computer accessories, and so much more. And with the all-in-one ecommerce solutions monopolizing the public’s needs (we’re looking at you, Amazon), the desire to shop at these niche market leaders—who typically charge more for the same products—is becoming less and less.

So, for our latest, Showdown, we looked at these two office supply bigwigs and used AlertBot’s external website monitoring system and its TrueBrowser™ technology to monitor both sites for a couple weeks, spanning from August 26 to September 16, 2018. After engaging in this different kind of “Office Olympics,” we were expecting the usual quiet response from two reliable websites (i.e. good performance), but instead found what was equivalent to, well, a fun office chair race gone horribly wrong.

Both Staples and OfficeDepot’s sites seemed to perform satisfactorily, with neither site ever really seeing significant downtime, but one of them really seemed to struggle with its load time.

AlertBot ended up returning over 800 alerts from Staples.com in the evaluated time span, with half of them being slow files bogging down the page, and the other half being page load timeouts. This doesn’t necessarily mean the site crashes, just that it’s taking unusually long to load. Their site regularly had a pop-up window during this time period promoting signing up for their email list, which seemed to play a part in disrupting the site’s load time and process.  (Staples.com 5/10)

On the flip side, OfficeDepot.com performed much better (despite also having a pop-up on its page), but while it seemed to see problems less often, it did experience two failure events, experiencing 98% uptime (compared to Staples’ 100%). The majority of the errors OfficeDepot experienced were slow files or longer load times. Despite this, however, it seems as though its worst times were in the middle of the night (a frequent site maintenance time), which is common for most sites. (OfficeDepot.com 7/10)

When evaluating a website’s speed, we look at the time it takes the site’s homepage to render and load to the point of being fully interactive by the user. These tests are performed from the perspective of a first-time visitor with no prior cache of the website’s content. AlertBot runs the tests inside real Firefox web browsers using AlertBot’s TrueBrowser™ monitoring.

OfficeDepot.com actually fared worse, comparatively. Their best day proved to be Thursday, September 6 with 9.9 seconds for the page to load. Their best time of day was at 6pm on Wednesday, September 5th at 6.4 seconds. Their worst is significantly worse, with Monday, August 27th seeing an average of 12.5 seconds, and the worst time of day being on the same day at 3am with 16.8 seconds! (OfficeDepot.com 6/10)

Typically, for the geographic tests, California is king, always turning in the fastest response time. For Staples, it’s actually North Carolina, who saw an average of 3.7 seconds of page load time. Washington, DC was second at 4.7 seconds, and New York was third at 5.2 seconds. The state with the slowest results was Missouri with 15.1 seconds and New Jersey with 15 seconds. Oddly enough, California, Florida, Colorado and Virginia all averaged 15 seconds—which is unusual. (Staples.com 6.5/10)

Things were the norm for OfficeDepot, however. They saw their fastest speeds in California, at 7.5 seconds, with Virginia being second fastest at 7.7 seconds. Their slowest performance was Missouri with a crawl of 19.9 seconds, and Utah followed it up at 15.6 seconds. (OfficeDepot.com 6/10)

These aren’t the worst website load times we’ve seen, but they also weren’t anything to brag about either.

For evaluating a site’s usability, we always select a common task a user might typically try to accomplish when visiting the sites and replicate it. For our previous Showdowns, we tested things like going through the motions of ordering movie tickets from a local theater or simply adding a similar item to both sites’ shopping carts. For this Showdown, we’ll see what the experience is like to use their respective websites to find an office executive chair and add it to our shopping cart.

From the point of typing www.staples.com into our Chrome browser, it took 30 seconds and 5 clicks to search for “office executive chair,” click on one to view its product page, add it to the cart, and click “checkout.” (It had us thinking “That was easy!”)

For OfficeDepot.com, it took about 40 seconds and 6 clicks to get to the checkout process. OfficeDepot had a pop-up as soon as we got to the site which added one click, and then clicking on the cart and going to the checkout seemed to be a clunkier experience.

It’s a tough call for usability, but we did find the Staples checkout process to be a tad smoother.

All things considered, here are the Usability scores:

It’s surprising how closely these two office supply giants performed – and how disappointing each did as well.  Still, neither were so bad that they experienced many full-on website failures, but both could benefit from some serious attention paid to increasing their website speed. Neither site really stands out above the other with its performance, because the good and the bad often balanced each other out, but when it comes down to considering the sheer usability as a tie breaker, we feel the verdict is…